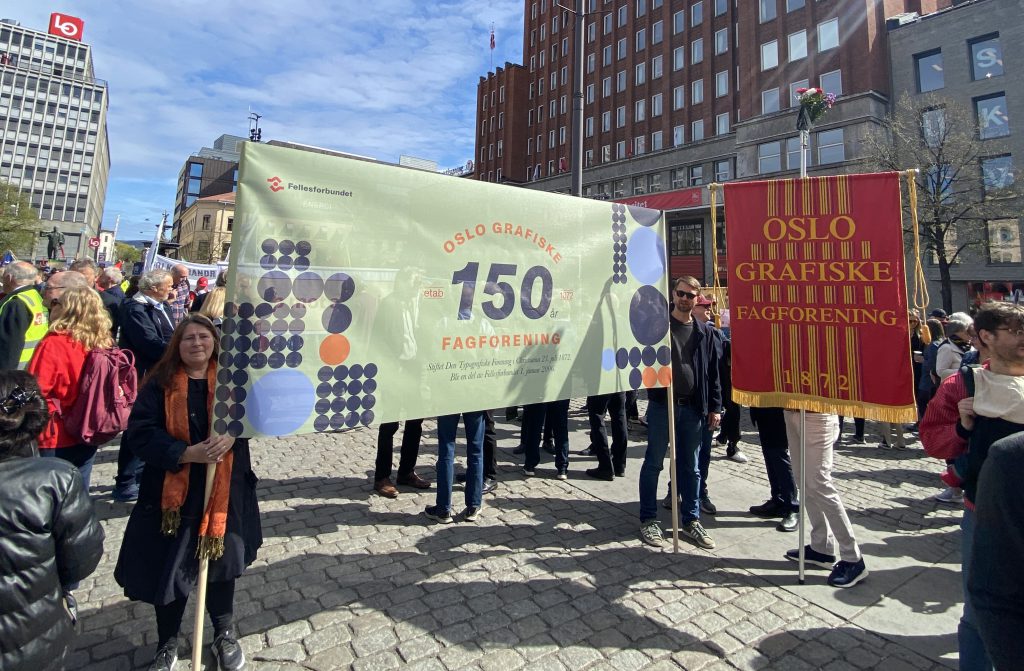 As printing and graphical workers in Norway celebrate their union’s 150 years, they are turning towards the future to keep building workers’ power. We take a look at the fresh wind of ambition sweeping through Fellesforbundet’s Oslo Graphical Union, the country’s oldest union, driving improved conditions that live up to a proud organising heritage.

A sector in movement

“Labour relations in the traditional graphical sector are well established and through their union, the workers have achieved good quality conditions. The times have changed, and our union must follow, with the evolution of the graphical sector, we have gotten a new area of graphical workers who work from an office on computers rather than in larger printing presses. While traditional printing remains a core service, the graphical industry today also includes the design agencies. We are drawing on the union’s vast experience to establish good conditions in these developing sectors,” said Kristin Mulleng Sezer, President of Oslo Graphical Union.

The products of those who work in design and advertising agencies is hugely visible, but their working conditions are not. Workers in this growing graphical design sector have not yet organised to the same extent as their counterparts in the traditional graphical sector. As a result, working conditions can at times be far from enviable.

Reports of unpaid overtime, unmanageable workloads and unpredictable hours are frequent. In response, through their union, the workers decided to increase support to organising in this growing sector of employment.

While a lot of workers in Norway have collective bargaining protection, this is not the case for most people working in design and advertising agencies. In order to change this, the union would have to show what was possible by getting a first collective bargaining agreement within one such agency.

To establish this first collective bargaining agreement, the union’s strategy involved leveraging Norway’s public procurement law. This law requires public institutions to give preference to companies that have a collective agreement with their workers when awarding public contracts. Given that most graphical agencies are not covered, BØK are set to gain a major leg up in accessing projects for public institutions, which represent a significant client base in the sector.

When the time was ripe to establish contact with the CEO, these arguments proved effective and the response was positive. Ten months after the launch of the organising drive, the workers at BØK had a collective agreement with their employer in February 2022.

“While this first breakthrough at BØK sets the tone, we will not be stopping there. Our ambition is to establish decent work across the sector. For that, we will make collective bargaining the rule, rather than the exception,” said Carsten Østby Håkonsen, Vice-President of the Oslo Graphical Union.

Poor working conditions are becoming an increasingly common talking point amongst the graphic design community. A targeted media outreach by Oslo Graphical Union, Fellesforbundet helped workers see organising as the solution. Drawing on their own experiences as workers in the sector, union representatives authored opinion pieces that they placed in specialised labour and design websites headlining the problems respectively: Large wage gaps, poor pension, no overtime pay and We recognize ourselves in crying at work, fancy dinners as a reward instead of an average salary.

The design agency sector is characterised by a larger number of small to medium-sized employers, as well as a more limited number of larger companies. The experience at BØK set a precedent, but organising company by company leaves the door open to undercutting and is resource intensive. Winning over some of the larger companies while they can still benefit from advantages of early-adopters of collective bargaining will be key to changing the tide.

Another part of the unions strategy is to sow the seed of change among students. The union is set to tour universities, vocational institutes as well as secondary schools to spread the word. By showing students that organising is the solution to addressing workplace issues, the union is providing them with the tools to improve their future conditions.

“150 years young and still going strong! The strategic thinking at Oslo Graphical Union-Fellesforbundet is a wealth to the union movement. Together we can draw on our collective heritage and keep building workers’ power now and for the next 150 years,” said Oliver Roethig, Regional Secretary of UNI Europa.

This website uses cookies to improve your experience while you navigate through the website. Out of these, the cookies that are categorized as necessary are stored on your browser as they are essential for the working of basic functionalities of the website. We also use third-party cookies that help us analyze and understand how you use this website. These cookies will be stored in your browser only with your consent. You also have the option to opt-out of these cookies. But opting out of some of these cookies may affect your browsing experience.
Necessary Always Enabled
Necessary cookies are absolutely essential for the website to function properly. These cookies ensure basic functionalities and security features of the website, anonymously.
Functional
Functional cookies help to perform certain functionalities like sharing the content of the website on social media platforms, collect feedbacks, and other third-party features.
Performance
Performance cookies are used to understand and analyze the key performance indexes of the website which helps in delivering a better user experience for the visitors.
Analytics
Analytical cookies are used to understand how visitors interact with the website. These cookies help provide information on metrics the number of visitors, bounce rate, traffic source, etc.
Advertisement
Advertisement cookies are used to provide visitors with relevant ads and marketing campaigns. These cookies track visitors across websites and collect information to provide customized ads.
Others
Other uncategorized cookies are those that are being analyzed and have not been classified into a category as yet.
SAVE & ACCEPT